Linda Hedlund graduated from the University of Music and Performing Arts, Vienna, in 2002 and went on to complete her doctorate in violin performance from the Sibelius Academy, Helsinki, in 2010. Since 2019 she has specialised in baroque violin performance at Novia University of Applied Sciences in Finland.  Dr. Hedlund has been successful in various competitions and has worked as first concertmaster a.o. at the Pacific Music Festival Japan (1999) with Michael Tilson Thomas and with Tapiola Sinfonietta (2004). She has also gained orchestra experience in some of the main orchestras in Europe and Asia and has appeared as leader/soloist with Sinfonia da Camera Finlandia, the Austrian Chamber Orchestra, various baroque  ensembles and  recording projects.

In addition to her career as a performing artist, she is active as teacher and has given master classes in a.o. USA University of Hawaii, Cervo Master Classes in Italy, South-America, Singapore and Asia as well as serving as member of jury in the international music competition in Singapore. She founded the Emäsalo Music Festival in 2006, taking place each summer in southern Finland. On her acclaimed debut CD (issued under the Finnish label Fuga in 2008) she collaborated with pianist Oliver Kern in sonatas by Franck, Saint-Saëns and Debussy. Another CD (with guitarist Otto Tolonen) was released 2011 by Classic Concert Music Group, Salzburg as well as a live concert video (USB), Tango Intimamente with tango arrangements for violin and harp together with Floraleda Sacchi (Amadeus Arte 2019). A critically acclaimed album with music for violin and orchestra by a.o. George de Godzinsky was released in 2021 by Naxos and an album with premiere recordings of Finnish music for violin and orchestra will follow up. 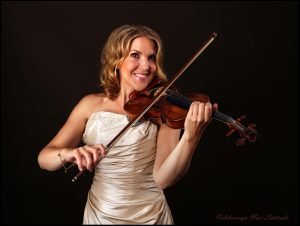